John Doyle was interviewed yesterday on Steve Byk's show. It was a very nice interview from a guy who quit his job, plays the races profitably and then wins the huge prize at the NHC. He not only goes into his background, but also (like many of you) has some opinions on what can make the game better.

One quote on Equidaily summed it up:

"I think there are things that players can do [to improve the sport] that they don't do. I just see it every day with takeout... I want to reward tracks that are aggressively trying to lower their takeouts and do the right thing."

This is something that more and more players are looking to do, and it is very important. Rewarding and offering solutions to tracks for their business is what a lot of us out there do, and we agree more of us need to do it.

John also went to talk about the Arizona law that outlaws Internet wagering in his state, and how it is a huge inconvenience to the modern player. We have been at that issue for some time, but we are no closer than we were back a year ago. The only way things can happen is if players get involved. We thank John for doing that via the media. Great work.

To listen to John's full interview, you can here. It's about half way through the first link.

Speaking of players getting involved, one did this past week with a good idea. It takes more than ideas to get something going however; it takes a willingness to spend some time on it. "Bombs Away Bob Grant" - who many of you probably know on twitter for his exotic tickets galore - said "why don't we get a little pool party going for Monday's at Sam Houston for their 12% pick 3".

The HANA pool parties for those who don't remember, were a pretty nice success. We bet seven or eight tracks over several months, targeting good takeout bets, or rewarding tracks (like John Doyle speaks of above) for their good work. In some targeted pools, the action doubled them. The Pool Parties were extremely labor intensive and took several weeks of planning. So, with little time before Monday we can not do an official party for Sam Houston the way we did the old ones.

But we can still bet! 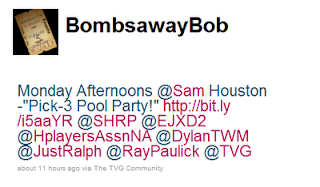 On the blog Monday we will offer out analysis, and we plan on doing it each Monday. For this week Jeff Platt has agreed to analyze the pick 3's. As most of you know Jeff is the programmer behind his software package and he knows his stuff, sometimes finding some very nice overlays. He is also a very long time player.

If any of you know anyone who would like to be a guest capper for Monday's racing at Sam Houston, please let us know!

John Doyle and Bombs Away Bob agree that we have to reward tracks that offer lower takeout, or are doing things that you would like to see done. As well, they are both getting involved.

For those who want to follow that lead, please join us Monday for the Bombs Away Pick 3's. Chances are we'll be playing on our twitter account here. Bob can be followed here. Spread the word and see you then!