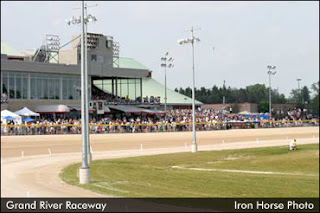 In Ontario, slots have been removed from the purse structure. One track - one with a good product for harness racing players - has massively reduced takeouts for their upcoming season. This reduction, from what we can gather, is the largest one time reduction in takeout in the history of the sport in North America.

The reductions total 23.15 per cent across seven pools:

The Elora, Ont. track is also introducing the Super Hi-Five wager for one select dash on each card. This wager challenges players to select the top five finishers in a race. The Super Hi-Five takeout will be 15%.

The full press release is here.
Posted by HANA at 5:58 PM No comments:


My brother and his family called me up about an hour before the race. I picked up the phone and said "Hey! What’s up?"

"It’s Kentucky Derby Day and we were thinking of you," his wife replied. "How’s THAT for an excuse to call?"

From there we proceeded to catch up – and had a conversation about my brother's new job, coaching his son’s baseball team, and who I liked in the Derby.

My pick was Normandy Invasion – who, turning for home, took the lead at 9-1 and looked for a moment like he might go on. But as fate would have it, he had been too close to a fast pace, and began to show the effects of that pace as soon as he was confronted by Orb.

But on this day I am not just a bettor.

Watching the Florida Derby – and now Kentucky Derby - winner, Orb, walk back to be unsaddled – flicking his ears, overstepping, and looking every bit like he wants to go around the track again – some "switch" deep in my inner core flips to the "on" position.

On this day I am more than just a bettor.