We recently began recruiting for HANA's harness racing working group. In this blog post, the director of the new group let's Tioga Downs know that harness players are very pleased. With the announcement that their super-low takeout plan of last year has been approved for 2011 along with a new massive stakes season planned, it could be a great year for the little track.

Tioga Downs, the Harness Track That Keeps Getting Better

What can you say about Jeff Gural and Company at Tioga Downs. After a successful experiment with reducing the takeout rate to being the best overall deal in harness racing last year; they have announced that once again, Tioga will maintain the same takeout rates as last year (Win/Place/Show – 15%; Exacta/Doubles – 17%; other gimmicks – 21%); the lowest allowed in the State of New York. The continuation of the reduced takeout rate is possible thanks to the cooperation of the Southern Tier Harness Horsemen’s Association which seems to ‘get it’; you need to give the gambler a lower takeout rate in order to encourage them to wager on your track and increase the churn on their races.

Quite a different attitude from the Harness Horsemen’s Association of Central New York, the horsemen’s group at Vernon Downs, which refuses to give an inch in their takeout rate. However, being this horsemen’s group doesn’t ‘get it’, their refusal is not surprising. This is why Tioga’s handle increased last year and Vernon’s handle decreased. What’s puzzling is many of the horsemen that race at Vernon also race at Tioga, so one can only think that the HHACNY leadership is not listening to their members and/or have a hidden agenda. 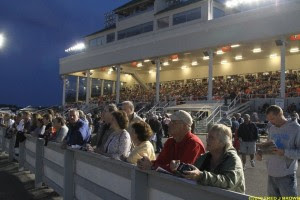 But it gets even better, this year, Tioga along with their sister track Vernon Downs will be offering perhaps the best stakes program in the country with the exception of the Meadowlands (hopefully), Chester Downs and Yonkers (where many horses avoid going to). How’s that for small tracks in Central New York?
In addition to the NYSS and NY Late Closing series, Tioga and Vernon Downs picks up many of the Historic Series Grand Circuit races ($600,000E) which previously were raced at the Meadowlands; some of which have been used in the past by some of the sport’s best three year olds to kick off their seasonal campaigns. The three year old Historic Series events will be raced at Tioga on the last Saturday in June and on the first Saturday in July. Also, this year, the Kindergarten Classic is changing with The Red Mile hosting two legs of the series instead of the Meadowlands. Being contested once again is the Ms Versatility which will have legs at Tioga and Vernon before the final is held at the Delaware County Fairgrounds during Jug Week.

But the stakes season starts with the John Simpson Memorials for three year olds which are warm ups for the $1 million Empire Breeders Classics for New York Bred horses. June 12 brings the Aged Open pacers to Tioga Downs with the $200,000 Bettor’s Delight and $200,000 Artiscape for the mares. Some of the nation’s most promising freshmen will be making their debuts in the ($600,000E) Tompkins-Geers stakes during Grand Circuit week in mid-July.

Early September brings the top trotters to Vernon Downs for the $200,000 Credit Winner plus the two year old stakes races which used to be part of Historic week at the Meadowlands and the stakes season at Vernon finishes with the John Simpson Memorials for the two year olds.

Despite what some of the naysayers in New York State are saying, Jeff Gural, Jason Settlemoir, Nick Salvi, and others in the racing department at the two tracks are committed to offering the best racing product possible in New York; offering stakes races that tracks with greater handles are unwilling or unable to offer. Plus with fewer racing days at the Meadowlands this summer, we may be seeing more Meadowlands horses making the trek north to race at Tioga.

According to Jason Settlemoir, “We appreciate the way horseplayers stepped up to the plate to support the Tioga takeout rate cut last year and we hope they continue to support us in 2011. Ultimately, the goal is to give horseplayers the same takeout rates as slot players. In addition, with our newly enhanced stakes schedule, we hope horseplayers will find another reason to play Tioga’s races as we attempt to make the Southern Tier of New York a destination for the sport’s best horses to race”. We agree and encourage harness racing horseplayers to take a good look at Tioga Downs this coming summer and continue to support Tioga Downs racing. Tioga Downs opens on Saturday, May 7 (Kentucky Derby Day).
Posted by HANA at 5:20 PM