We found some odd hits on the blog today, from Germany. After reading the website, and dusting off some grade 8 German (I enjoy the beer, but am not overly well versed in the language), I think I have the gist, but let's see if you do.

The way I read that, it says something like - 'if you think 22% takeout is high, you should come here. The frau's and frauleins who run our racing won't lower it either and we've been sinking into the Berlin river quicker than a lead bratwurst.'

Anyway, takeout in horse racing and the unwillingness to do something positive for the sport with pricing, is not only a North American disease.

Horseplayer and industry watcher Liz Mullen, who we looked at before re: Twitter, is back at it again - she's quite charged up. She wonders why there are no players on the CHRB or involved in other boards (a lot of players & industry watchers have wondered this that we have heard from). Ray Paulick even got into the discussion. But, I don't think he is calling for a player boycott of North American racing. 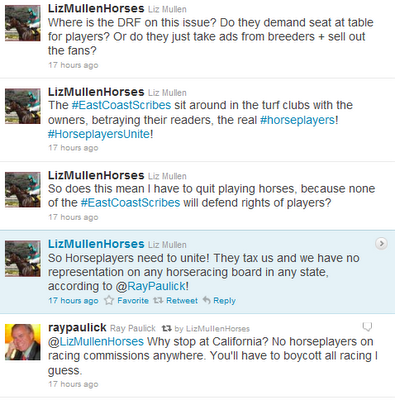 Players Boycott's twitter site added to Ray and Liz that people have been boycotting for a long time - perhaps both here and in Germany. Handle since 2002 is off close to 50% in real dollars. I wonder: If Wal-Mart, Apple or Nissan had half their real sales cut in only eight years, would they have raised prices, followed the status-quo policies and kept the same people in charge like racing has?

Santa Anita (the track Liz and other boycotters are fired up over, including some professional "whales") still seems to be having handle issues, despite dropping back to four days a week. The last we heard, handle was off somewhere around 18%, despite having the Mid-Atlantic signal this year. Meanwhile, places like Tampa and Gulfstream (up 17.3%) seem to be doing well. We'll have more on handles this week at the blog.
Posted by HANA at 5:54 PM