No Hurry at the CHRB 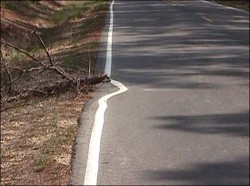 Yesterday's CHRB meeting has come and gone. It was nice to see a few people stand up during the public comments section and mention the recent takeout increase and the handle measures that have accompanied it. Trainer Peter Miller's father, a man who has been attending the racetrack almost each day for 40 years, was particularly pointed in his comments. We'll have a full update later.

Ed Zieralski noted that today in his column and stated:

The CHRB continues to draw fire for implementing an increase in the takeout of multihorse wagers such as exactas, trifectas, superfectas and Pick Six in California races. The increased takeout — 2 percent more on two-horse bets and 3 percent more on three horses or more — went into effect Dec. 26. Despite indications that betting handles are suffering, it was clear the board isn’t in any hurry to rescind the increase that was mandated by the state legislature.

Commissioner John Harris relayed that it is not the CHRB's job, it is for others:

“That would have to come from the tracks themselves and from the TOC,” commissioner John Harris said, referring to Thoroughbred Owners of California."

We'll have some numbers and some more commentary this weekend. As well, we plan a Monday feature interview again this week.
Posted by HANA at 11:27 AM