The Distaff is a Pari-Mutuel Puzzler

What race interests me the most this weekend? The Distaff.

What got me going with it, was of course, the Beldame, where Royal Delta lost to her younger foe Princess of Sylmar. When the connections sportingly offered her up again for us as fans and bettors for the Distaff it made an already interesting race more interesting.

What tilted me as really really wanting to watch this race, however, was the handicappers in this month's Horseplayer Monthly (you can get your copy for free here) 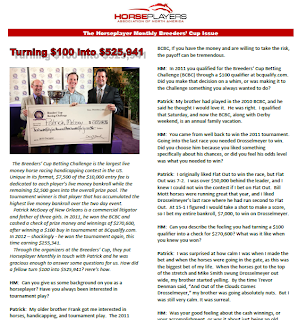 When asked a simple question: "Will Royal Delta be better than she was in the Beldame" we saw what makes the game of handicapping so great - a difference of opinion.

John Doyle: "I’m not sure. She might be a bit past her peak form now and has been using that front running style to dominate soft fields all year. Princess of Sylmar ran past her pretty easily in the Beldame. Also, dealing with Beholder early could compromise her finish. She is the champ and can repeat again, but I am betting against it."

Mike Beychok: "She'll be much better"

Mike Dorr: " Almost certainly. I buy the narrative that Mott that did not have her primed for the Beldame, aiming for the BC. Her worktab seems to bear that out - before a "target" race, she would always fire a bullet or top three effort on the day. Before the Belmont race, she was not. She once again has a full clip before the Breeders’ Cup."

Jessica Chapel: "Yes, but not well enough to beat Beholder"

Mike from Paceadvantage.com: "I don't think she will race better. I think she's going to have a tough time against Princess of Sylmar once again, and I don't see her improving off her last."

This is why this is a great race, in my opinion, and what also makes handicapping the greatest gambling game invented. One simple question - many answers.

To read the full issue, it's here. It's 26 pages, so you might want to print it out. We thank everyone for contributing.