The Effect of the 2010 Los Alamitos Takeout Increase, In Pictures

We'll let these pictures speak for themselves. We sincerely hope the CHRB rethinks their positions. Handle, customers and racing opportunities for our participants are at stake. 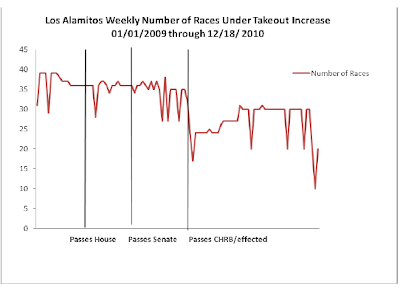 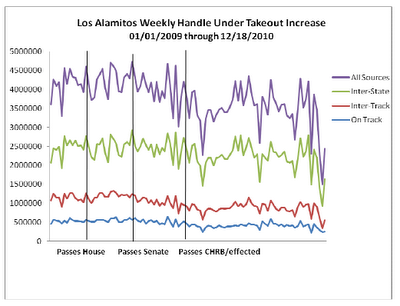 Note: A comment below by Ms. Betts as an addendum.


A note: the crazy looking observations for the second in December 2010 look that way because Los Al/Equibase fail to report handle data for 2/3 of the races that Los Al claims it ran that week. I've reported the number of races for which handle was reported, as a result, so that implied handle per race is not distorted. In the third week of December 2010, inclement weather prevented racing on Sunday Dec 19.
Posted by HANA at 5:55 PM

What is espescially sad about that is two things......
1- Los Al handle was actually moving up a little before it passed the senate. They were building momo there. Then.... takeout hike and drop.
2- They are currently starting the same process in thoroughbred racing.

The trend lines are stunning. There was actual growth happening and the line of best fit is really nice. Then it falls off a cliff and completely reverses. Los Al was growing for cripes sake and they blew it!

With t-breds now following the same path I honestly feel quite disturbed. That is the best way I can put it, this is disturbing.

The key things that drive handle increases or decreases today are takeout and signal fees.
Increase both, and I don't care what track it is, the chart will look like Los Al's.

Anon, I agree, I was actually starting to look at Los Al around 3 or 4 months before they increased takeout. Now I just get more sleep.

The on-track numbers are horrible. That is where we grow some new blood in our sport.

I agree... disturbing is a good word.

I am a takeout hawk (mainly because when I started getting lower rake my handle exploded, then I educated myself on why), and I am not surprised it happened like this (altho takeout increases usually take more time to act like that graph). However, I am not "joyed", I am disturbed and fear for the sport when I look at that.

Kudos to you bettors (you know who you are) who stopped to send a message to them. You are the reason for the huge drop after it was passed. You tried to send the message this was bad, but they would not listen.

no spin needed on that graph

I'd like to see Remington's graph just to show it isn't just the economy.

I think it's the weather and the races off the turf.

Interstate-ADW (which only got half the takeout increase passed on for the most part) was down, but not down as much. The ontrack players, playing full juice for the coffers abandoned quarter horse racing.

You takeout guys are hilarious.

It's obvious from the graphs that Los Alamitos just isn't as entertaining as it once was.

It will get even worse for Los Al soon. The takeout increases on the TB's will cause their handle to go down due to the bettors having less money left for the night races.


A note: the crazy looking observations for the second in December 2010 look that way because Los Al/Equibase fail to report handle data for 2/3 of the races that Los Al claims it ran that week. I've reported the number of races for which handle was reported, as a result, so that implied handle per race is not distorted. In the third week of December 2010, inclement weather prevented racing on Sunday Dec 19.

The shocking thing to me was the trends. Being a horseplayer (and someone in real life that reads numbers all day) we all know that trends are really difficult to stop.

The trend from early 2009 was so good for Los Al. They were building handle at a time when handle was falling by 5% or so nationwide, which was great news. Then.... boom. The takeout hike comes and the trend immediately reverses. The lines of best fit almost make a triangle.

We don't have 2008 there, so we cant be sure, but it seems Los Al was really on the right track until the takeout hikers stepped in.

I hope the Cali tbred numbers do not follow the same path, and maybe they will not as takeout hikes generally take time (as you have noted and know better than I). But after reading your chart maybe it won't take much time.

Anyhow, thanks for compiling that. It is eye-opening and would no doubt be buried somewhere in a vault because when bad racing policy happens, that is where it tends to end up.

I'm glad the pictures are helpful.

I've started inputting the 2008 numbers for this very reason; I want to see the trend there relative to the first half or so of 2009. Hopefully I'll get that done very soon.

It's hard to estimate trends very accurately over the entire two year period because there is so much volatility in the 2010 data, and also because as you have noticed there is a clear trend reversal in 2009 - a break in trend. There are formal tests for that i.e. tests of whether or not there is a significant break in trend at a specific date, and so once I have the 2008 numbers inputted I'll work on that.

So - more to come. I do wish the data were accessible in machine readable form. It's a tremendous deterrent to independent analyses (which should be welcomed), in my opinion, that it must be extracted from a wealth of other information in a large pdf file one number at a time.

This data, like most handle data makes the case that takeout has hurt handle confusing at best.

Making handle comprisons is very difficult. There are so many variables to consider, when comparing one year to another.

Is the reason for the decline the takeout or number of races?

It appears that the actual handle per race is up.