Shout Out to the Tioga Trendsetters 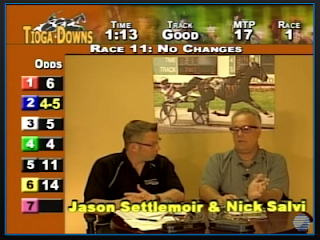 Nick Salvi and Jason Settlemoir of Tioga Downs spent much of the pre-game show talking about how they lowered their takeout across the board.

Nick said "a lot of tracks are dropping on some wagers, but we were the trendsetters."

To drop takeout across the board as much as they did is very difficult for a track operator to do - especially with having to deal with horsemen groups. But they did.

Handle at Tioga was up 8% last year at Tioga and in contrast, their sister track (where horsemen did not approve a takeout decrease) was off around 6%.

This season Tioga is guaranteeing a pick 6 each Sunday at $10,000 and their new slogan is splashed across the simo feed: "We take less, so you can bet more".

Harness Fans: Show your support for this little track that cares. Perhaps after HANA Harness's Pool Party at Western Fair at the end of the month, a pick 6 pool party is in order?
Posted by HANA at 1:20 PM

Everyone into the pool!

These are the kind of meaningful takeout reductions that we need to support. Admittedly, I've been somewhat critical of one-wager reductions (i.e. a token 15% five five or similiar). But when a track is willing to make across to the board reductions, they deserve our patronage.

We're waiting for the sun to come out (40 days & nights of rain nearing completion) and then we'll open the pool, fire up the grill and put on the swim gear! Come on in...