This interview with Mark Midland appeared in the October edition of Horseplayer Monthly. To read the March 2014 issue with 32 pages of handicapping interviews and insight for free, please click here.

Mark Midland is CEO of Derby Wars and HorseRacingNation. Derby Wars is a horse racing game combining skilled tournament play with a social game experience to appeal to both tournament veterans and casual fans. They offer games with entry fees for as low as $1 all the way up to $475 entry fees.

Mark has over 15 years of horse racing marketing experience having held executive positions with Churchill Downs Inc., Harrah’s and Youbet.com.  Mark has a track record of innovating new products including the Kentucky Derby Future Wager (1999), establishing 20-horse wagering in the Kentucky Derby (2001) and the daily guaranteed Pick 4 at Hollywood Park (2003).

Q: Why did you create DerbyWars? and have you seen tournament players embrace it since your launch?

A:  We had launched HorseRacingNation two years prior, and we were very excited about its growth, but we knew in this industry it would take time to grow, so we were looking for a second opportunity.  We are all horseplayers and we’ve seen tournaments as an exciting and growing part of racing the last few years.  But we wanted to do tournaments better than anyone had done before.  We took a look at Facebook games, mobile games – and said, let’s set a higher standard for the fun & engagement of tournaments.  And that’s what became DerbyWars.


We started building DerbyWars in January 2011.  We actually had it ready to go in May 2011, but we weren’t happy with the final product.  So we scrapped the design completely and went back to the drawing board, launching in October 2011.  So with the start of Keeneland, DerbyWars is now two years old!  Today we’re running about 60 separate games a day on racing 7-days a week!  We’re thrilled with the response we’ve received from players.

Q: This space seems to be growing in popularity. Why do you think it is?

A:  I believe there are several reasons for the growth of contests.  First, you get a great run for your money for a single investment.  Plus, you can invest a little and win a lot.  But it’s also simpler.  When we hold our $10,000 contest every Saturday, there are 67 entries and someone is walking away with a $5,000 first prize.  There’s a rush of adrenaline as you compete for 3 hours.  Playing the races is great, too – but you might put $120 into a Trifecta only to have it pay $100.  In contests, the prize is clear.

A site like DerbyWars offers dozens of games every day – so you can choose the size of your investment, the number of players and what you’re trying to win. 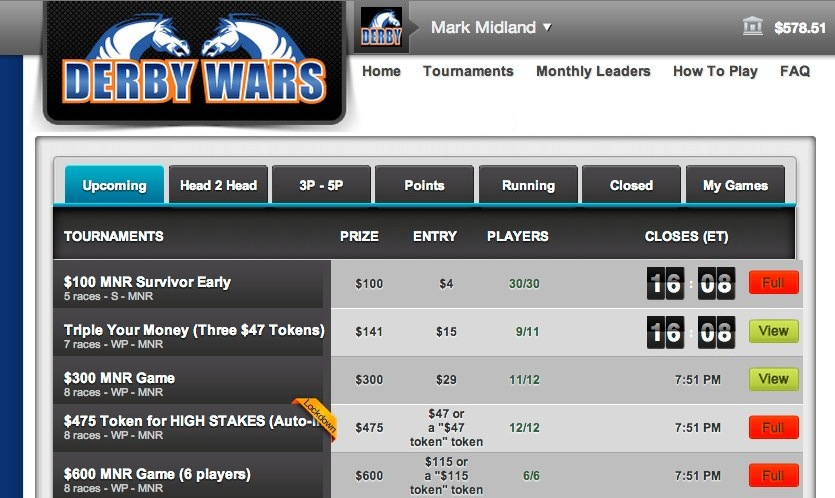 Q:  Online poker players have long been accustomed to “free play” or “cheap play” tournaments. Do you feel this is a way to attract that type of market, and possibly increase racing’s reach with newbies, or poker players?

A:  Yes, smaller entry fees are an exciting component of tournaments.  Everyone loves to enter for a little and win a lot.  DerbyWars features games every day that you can play for free or as little as $1 or $2.  To get a couple hours entertainment from a $2 contest entry – we think that’s pretty cool!

But one of the most exciting things for us in launching DerbyWars was seeing how readily newer racing fans embraced tournaments.  When you think about it, tournaments are much simpler than betting at the windows.  You don’t have to figure out what bet, how much, which horses and how to structure it.  You simply have to pick a number.  So you pick the 4 horse, and you see that 3 other people in your game picked the same horse – and you realize – that maybe you do know a little about what you’re doing.  It’s just so much less intimidating.

Q:  What are your most popular games?

A:  Our $10,000 Saturday game is very popular, and every Sunday we run a $5,000 High Stakes game with only 12 players.  The response to the High Stakes has been tremendous and we’re now running it on both Fridays and Sundays during Keeneland.

Other popular games include Head-Head Games, where you take on one other player, usually on just one race card.  It’s an entirely different strategy than playing in a big tournament; it’s all about picking winners and staying ahead of your competition.  Head-Head takeout can go as low as under 7% for our $800 Head-Head games.  The other thing about Head-Head games is that it’s very much about your competition as well as the races. 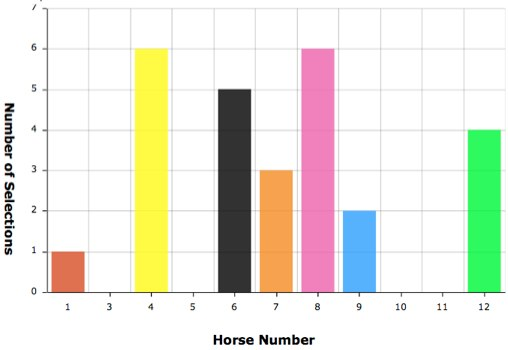 We also have daily Survivor games that are very popular, plus a Lockdown feature where all picks must be in ahead of the first race, which is great if you can’t play live race-by-race.

Q:  How many games do players have to choose from on any given Saturday?

A:  We’re running about 75 games on the typical Saturday starting around 12:30 ET and running to nearly 9pm ET.

Q: Any advice for someone playing for the first time (stakes, type of game, etc)?

A:  The best way to get started is to set up a free account and get 1,000 points for free to get started.  When playing for money, the best place to start is in Head-Head games and small 3 to 5 player games.  Those are great way to start competing and start winning!

Q: Thanks for your time!

A:  Thanks for the interview!  We enjoy supporting HANA and look forward to hosting our third annual HANA – DerbyWars game this spring!