The Common Thread on Handle Movements 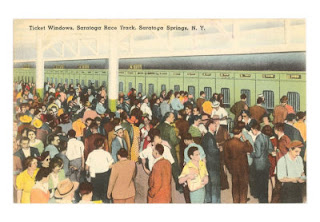 We were reading the Paulick Report this morning and noticed that Hastings Park in British Columbia has been having some success.

They appear to be taking a multi-pronged approach by being more customer and player friendly and that process began in early 2011.

"On the heels of Santa Anita raising its takeout, something that has clearly alienated many customers, Hastings went in the opposite direction. Mutti decided to go the extra mile for the fan. Not only did they lower the takeout, they put in Wi-Fi throughout the grandstand, upgraded their graphics package for their video presentations and created a Pick Five with a carryover component. The Pick Four takeout went from 22.3 percent to 15, a decrease of 36 percent. "We are trying to reengage the horseplayer that we might have lost, not only locally but throughout the marketplace," he said."

It's about branding, marketing, lower takeout, field size, and player friendliness. It's not reinventing a wheel.

This is a common thread of late. With many tracks.

Charles Town started lowering takeout precipitously and becoming more player friendly a couple of years ago. Their handle has gone up and people who were never even looking at Charles Town are.

Last year they had their 15th straight month of handle increases. Their pick 4 handle, buoyed by lower rake, was up 55%.. Pick 3 handle was up 16%.

Woodbine lowered takeout in 2011, began to offer guaranteed pools, and worked hard to be more player friendly. Their handle was up 7.5%..

Kentucky Downs restructured, lowered takeout and had a record meet.

Balmoral Park in harness lowered takeout and began to offer more and more better opportunities. The pick 4 handle has gone from $8500 per pool, to over $30,000 per pool. This has spilled over: They've gone from $77,000 bet per race, to $92,000 bet per race. I remember back in 2010 when they did this. After two months of it and handle was not trending hugely upwards, some were telling them to jack it back up.  Thankfully, they knew Rome wasnt built in a day, and long time suffering horseplayers would not change and churn more overnight either.

Keeneland, of course, has always been player friendly. If some executive said "let's raise takeout to make more money" at a Keeneland board meeting, they'd probably be replaced immediately and don't think for a second horseplayers don't realize that. They're the #1 track in the HANA ratings for a reason. Their brand continues to be solid. They've set some handle and attendance records recently.

Tampa Bay Downs has been lowering takeout since 2001. In that year their average daily handle was less than $2M. Now it's over $4M - it's doubled in ten years.

Penn even lowered some of their egregious takeout. Handle has been trending higher.

On the flip side, California who raised rakes in 2006 to fix things, were back in 2010 and raised them to fix things, well again. Their handle has been pretty disappointing; the problems they have are still there. If not for the low takeout pick 5, started after handle imploded in early 2011, what would their overall handle be?

Los Al, which was supposed to be a "test case for higher  takeout" has seen their handles become anemic.

What about Parx? Lotsa casino money, but look at those takeouts! Parx handle is poor, and has been for some time now.

The above does not mean that lowering takeout is a cure all for everything. If you and I are selling CB radio's and offer them out at $5 instead of $10 it doesn't mean we're going to sell more. For proof of that there are tracks who are having problems even if they have lowered takeout - their place on the dial, their long term branding, their product, their field size and other external struggles tracks face all play a part in handle. If someone tells you takeout is the only thing plaguing the sport, they're wrong.

However, a takeout reduction allows a track to say "look at us, we are trying to give you a boost on payouts, trying to get field size up, trying to show you a good time if you visit on-track; we're open for business and we want your betting business".

This simply allows them to do things to build on the success that they may achieve. It puts more money collectively in bettors pockets, so when they cash they have more in the ADW account, or on their credit voucher at the track, so they can bet more the next race. It helps handle grow, and helps customers have a better time by having a bankroll last a little longer.

Often times, tracks who lower takeout follow with free PP's, concentrate on field size, look into Trakus and HD pictures and better graphics. Player friendliness is an overall strategy, not just a one off.

Keeneland is open for business. So is Balmoral, so is Charles Town, and so is Hastings. These are places who want your money and they are going to work for it.

Horseplayers, in some way shape or form, over time, are saying "yes".

This is what horse racing needs. More answers of "yes" to the question "are you going to bet my track this weekend?"

Hollywood just had a handle gain of supposedly 7 to 8% following their fall meet.