A Little Respect For the Horseplayer Please

They say a picture is worth a thousand words. Today we have three pictures. The first is a screenshot I took while watching race replays on my laptop. The race in question is R6 at Arlington Park from May 27, 2012. The second and third screenshots were taken on Tues 05/29/2012 at about 1:00 pm Eastern time and show the Official Chart as it appeared on the Brisnet.com site. (I mention the date and time of the chart screenshots in the hopes that someone at Equibase will give this a second look – Corrected beaten lengths and times for the horses involved would appear to be in order here.) 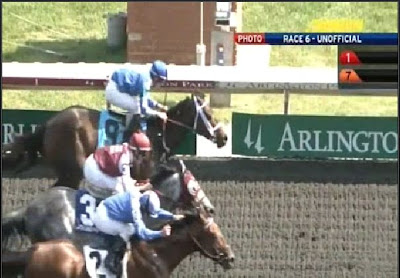 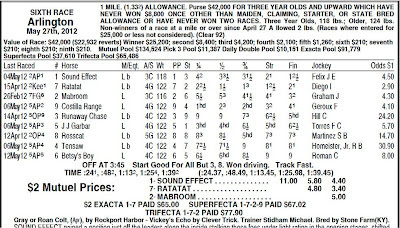 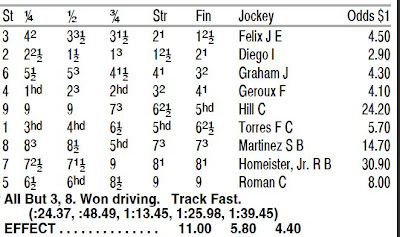 The screenshot of the race video clearly shows three horses noses apart. A photo was required by the placing judges to separate them.

Yet the Official Chart shows daylight between these horses.

I hate to ask the obvious, but…

If the Official Chart can be so blatantly off – How much hope, if any, should we as horseplayers hold out that the published times (and speed figures) for the horses involved will have any semblance of accuracy when the first of these horses returns to race again a few weeks from now?

We at HANA would like to know what you think about this. We welcome commentary from players, track management, horsemen, and (in this case) the chart caller.

The Chart Caller was asleep or was thinking of the wrong race. Someone should have contacted the Brisnet about this. Let the caller go back and watch the right race and correct the chart.

I'm struggling with the fact that the numbers on the saddleclothes don't match the results...

The photo above was for show.

On twitter, the marketing person from Arlington said this was likely a keying mistake and no fault of the chartcaller.