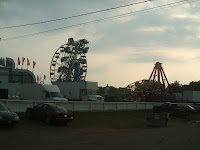 I just returned from lovely Prince Edward Island where I took a nice holiday. While there I took in the Harness Racing festival at "Old Home Week" that happens every year in the capital city of Charlottetown. The week is well attended, with tourists, natives and locals gathering together for a week at the fair, harness racing, and much more. The $60,000 Gold Cup and Saucer Pace, which attracts well over 20,000 fans each year, culminates the unique and interesting event.

Arriving at Charlottetown Driving Park, I noticed that the racetrack was on the fair grounds, which I had not known. The various rides, games, cotton candy kiosks and so on were spinning, and serving and so on. Bypassing the fair I went to the track and enjoyed the day and evening. I bet, had some good food, and enjoyed my time. After the races were over I decided that a walk around the fair would be a good idea. I had not been to one in many years, so I figured it was time to.

Walking around the rides, and not thinking about hopping on one (I like rides about as much as betting into a Philly Park trifecta take), I headed to a line-up at the dart throw. Why were people lined up to throw darts? Who knows, maybe some good prizes. It turns out that the balloons that the customer had to break were about a millimeter apart; so close a blind man could go five for five. People were winning, and smiling. The price was $5 for five darts, so I gave it a go. I won a stuffed dog. I think purple dogs are cool, so $5 was not too bad. Everyone's a winner at the dart throw.

But that struck me. $5 to win a stuffed dog that they paid a dollar for? Nice business. You could spend $20 on twenty darts and get a cooler stuffed dog, this one worth maybe $8.

I walked to the basketball throw next. No one was there; no buzz at all. The hoops were 20 feet off the ground. I asked the fella why no one was trying it and he said "c'mon it's easy. Three balls for $5 and you win this great prize." The prize was worth more than $5 that's for sure. Since I was a bench-warming point guard in high school and still had visions that I was Allan Iverson (but simply overlooked by scouts), I took a swing.

It was impossible. I think I hit the rim once. Shaq with Ben Stein on his shoulders could not dunk a ball in those hoops.

I could see why this game was not very well attended and I left.

It has long been a held belief that you can't win anything at carnival's - the deck is stacked against you. People believe that the hoops are too small, the gun sites are off, or the balloons are made of titanium. What happened from when I was a kid to now?

I think carnival folks have learned that people need to win to have fun, and to come and play your game. They are not there to be taken, as they are tired of it over the many years they have been.

A poster at Pacedvantage.com posted something poignant regarding takeout, and in our case here, something to do with fairs:

"Even if you treat it (betting on races) as recreation, you still want a fair shot. If I go to a carnival and try to win a stuffed panda by throwing softballs at milk bottles, it's all for fun and I really don't need the panda, but it would still piss me off if I found out one of the milk bottles was nailed down. 20-25% takeout isn't exactly nailing the bottle down, but it sure is a pretty strong glue."

Fairs have learned that giving people a shot to win is a godsend. Why won't racing follow that lead and lower takeout to send more people home winners? We are not as progressive as the people who run a dart throw game at a carnival, I guess. To me that says something.

This piece was contributed by a Canadian HANA member.
Posted by HANA at 2:58 PM

I wonder, how many thousands of players out there are betting less these days because they know that the milk bottles are glued down?