Where have all of the so called racing journalists gone?

Last week, when The Associated Press picked up the story about the situation at Santa Anita, their reporters wrote about microfractures.

APNews.com | By PAUL NEWBERRY | Friday March 8, 2019
Column: Horse racing needs to clean up its act _ or go away:
https://apnews.com/ecd8fa29fdfd4da68d8fa52359fe1f23?utm_medium=AP_Sports&utm_source=Twitter&utm_campaign=SocialFlow

"These are orthopedic failures, not single-step failures. The horse didn’t step in a hole. The horse didn’t take a bad step," she said. "If you bend a paper clip back and forth 200 times, then put it back in shape so it looks brand new and hand to me, the next time I bend it, it might come apart in two pieces even though I insist I did not bend it hard. That’s how these fractures occur."

It starts with a microfracture. Then a small, partial fracture. Finally, in the heat of a big race or perhaps just a light training session, the bone shatters.

It seems sudden, a fluke.

Most likely, it’s not.

"This is really just the normal physiological consequence of an increasing workload," Lyons said. "Take a human runner. Most runners know that when they increase their distances and then say, ‘Boy, my shins were killing me last night after a run,’ that they need to back off for the next week. They need to let it heal. What they do with horses is give them anti-inflammatories without a diagnosis, then keep training and racing."

Lyons said new technology is being developed that would allow a CT scan to be performed in a matter of minutes on a horse’s front and rear legs, which could be a revolutionary step forward in equine medical care. But the industry must be willing to pay for the machines, which are expected to cost about $300,000 apiece. Also, there must be enforcement in place to ensure that when a potential problem is discovered, the horse is kept off the track until fully healed."


I find it interesting -- alarming -- that none of the so called racing journalists writing about the situation at Santa Anita have even mentioned the word microfracture.

Why do you think that is?

Six of the 21 horses suffering fatal breakdowns at Santa Anita between Dec 26, 2018 and Mar 11, 2019 raced on a sealed surface within a few weeks of their fatal breakdown. (See the chart posted by Psychotic Parakeet at Paceadvantage.com here: 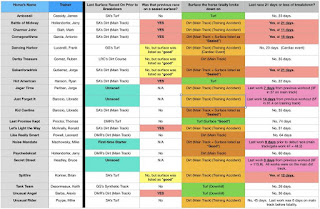 Is there not one racing journalist out there who's willing to write a hard hitting story connecting the dots?