After reading Jeff's post about the different sized exacta pools at Del Mar and Saratoga, we at HANA HQ got to thinking -- What about the Woodbine Pick 5?

What's been happening? The chart below illustrates some random days, with a ratio of pick 5 to the 25% takeout pick 4's. 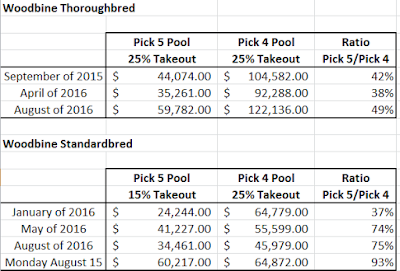 Since September of 2015 until this month, the Woodbine pick 5 for Thoroughbreds at 25% takeout attracts approximately 40-45% the money the pick 4 at 25% takeout does.

In January of 2016, the standardbred pick 5 at 15% takeout started slow, with near the same pick 5 to pick 4 money ratio as the Thoroughbreds.

Since that time, however, it has grown rapidly. This month it's over 75%, and on certain Monday's, where the standardbreds are really the only major product to bet, the pick 5 is attracting almost as much as the pick 4 is. In fact, some days the pick 5 for harness racing attracts more money than it does for the Thoroughbreds, who are, of course, a much higher handled signal.

It is interesting that it took some time for the pick 5 to challenge the pick 4's with the standardbreds. It is often said value takes time to show itself, but sooner or later it does.

Does takeout - i.e. size of payoffs - play a part in the above statistics? It probably does.