Back in March, Churchill Downs petitioned the Kentucky Horse Racing Commission for a change to the carryover rules for the Derby Day pick 6.

As Steve Crist wrote in the DRF at the time:


Sick 6 at Churchill - Speaking of carryovers, here’s hoping someone hits the pick six on the Kentucky Derby card at Churchill Downs on May 7. Otherwise, a game of parimutuel three-card monte will kick in under a scheme unfortunately approved this week by the Kentucky Horse Racing Commission.

To see how it works, let’s suppose that the Derby pick six pool, where the minimum bet is $2, is exactly $1 million. After the usual 22 percent takeout, that leaves $780,000 that’s supposed to be paid out – $190,000 in Derby Day consolations and $570,000 that normally would be up for grabs in a carryover pool when racing at Churchill resumes on Thursday, May 12.

Instead, Churchill will add only half of that $570,000 to the May 12 pool, which will be conducted with a 20-cent minimum and with a mandatory payout. The other half of the pool will be carried over to Friday, May 13, to seed a new Rainbow-style “Single 6” pool that Churchill is beginning that day. That pool is paid out only when there is a lone winner, so it’s entirely possible that the Derby Day carryover money won’t be paid out until June.

This is dangerous policy that disrespects the integrity of the wagering pools. It makes the effective pick six takeout on Derby Day a whopping 49 percent

This ended up happening. As Marty McGee pointed out today:

Seeding jackpot bets with another pools money, and "three card monte" - as Steve Crist puts it - we feel are emblematic of a sport who has forgot someone very important: The Betting Customer.

The Pick 6 stuff from Churchill makes me want to not bet a dime there this meet. Thankfully it will be easy to pass up those field sizes
— JoshD (@_JoshD) May 9, 2016

The "#Sick6" is something that's being used to cure a bottom line, while in our opinion, it should be looking out for an entire industry.

Some (not all, see Keeneland and Kentucky Downs and Canterbury to name a few) in the sport all too often feel it has to resort to such prestidigitation, because "no one is betting horse racing." Well, for that, they do have a point: 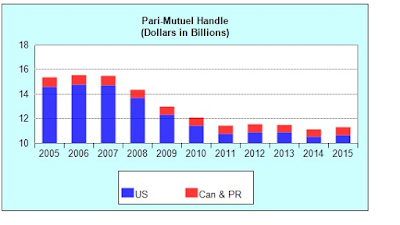 We ask, what came first, the chicken or the egg?

Although some would like you to believe this drop has been inevitable, we see evidence that the argument is faulty.

During this time Nevada sports wagering has taken 5.5% off a bet, expanded reach, and treated customers fairly well - so well, they want to bet more and more money on sports. No funny parlay's, no sick 6, no takeout hikes. Just betting and customer service.

Unlike horse racing, Nevada sports betting has not had a monopoly on internet wagering like racing has. It doesn't have legal status in 43 states. It does not have hundreds of tracks and OTB's as distribution points. It does not have dozens of ADW's. It's being done in one city, miles and miles away from the rest of the country's bettors at a tremendous disadvantage.

The gambling business is big and growing. For horse racing it has not grown for many years. With policies like the "sick 6", which add to takeout, and anger and madden customers, we can fully understand why.