"In-Running" Betting Passed in New Jersey. Here's What That Is.

According to reports, New Jersey bettors will have the opportunity as early as this spring to bet "in-running" on horse racing (in-running has been currently passed for the Meadowlands, Monmouth has not been finalized.)

What exactly is that and how does it work? A Horseplayers Association board member penned an article last year on exactly that topic for Trot Magazine, a Canadian harness racing monthly. Here's that article, reprinted with permission.

Your growth will come instead from the dissatisfied and unsatisfied. The dissatisfied know they want a solution, but are not happy with the solution they’ve got. The unsatisfied are the folks who do not even realize they have a problem that needs solving. That is why focus groups are often so useless. The people you really need to hear from are the great unwashed, the people who are not even looking at you. That is where you will find the customers you need when your current line becomes obsolete.”

- Seth Godin from Free Prize Inside, The Next Big Marketing Idea

I was getting ready to start my work day this winter when I got a message from a friend.

It went something like, “1:54.81 will hold up here and you’re getting three to five. There’s no one left that was even close to that time the last time these girls raced on the Sochi track.”

My immediate response was “what is he talking about”, until I realized he was betting the women’s speed skating final at the Sochi Winter Olympics, while the event was going on. It’s called in-running betting, mostly made popular by British betting exchange betfair, but also utilized in Las Vegas and offshore books for sports like football.  It’s a new form of wagering, and it certainly – in this new connected world – here to stay.

In-running betting does not only happen with popular human sports, as women’s speed skating markets can surely attest, it’s also in use for Thoroughbred racing and has been for some time. Just last year the great Black Caviar raced a short five furlong affair in Australia and she, and she alone, had $40 million matched on her to win; most of it at about 12 cents on the dollar (in decimal odds this is 1.12. In North American racing odds it would be near 1-9). A fair portion of it was bet while the short 55 second race was being run. That’s where the action took hold.

Black Caviar broke well but seemed to be not quite as keen as she usually is. This prompted bettors – on laptops and desktops at home, iPads or iPhones or Blackberry’s at the track – to start letting her price out a notch. Hundreds of thousands of dollars were passing through cyberspace and cell phone towers as she rose from 1.12 to 1.25 to 1.33 to 1.45. As she approached the wire, her lead diminishing in every foot of turf, her nostrils flaring with her equally game opponent bearing down on her, she rose to 1.90 as the wire finally came. She was beaten, or was she? Another several hundred thousand traded on her because no one was sure; it was a photo. Yes, megabucks were still humming, betting on a photo. The backers at 1.90 (almost even money) were rewarded, because the photo sign was removed and the strapping black racemare was still undefeated.

This could not have happened even ten years ago; maybe even five. But it’s happening today.


Josh Nelms, an Australian harness racing player believes that racing has everything going for it.

Writing on his blog “In-Play Analysis of Australian Racing” he says,

“Harness racing is still the premium in-play product. Due to the fact it will take approximately 2 minutes to run a race there's so much time to get set or get off. I only wish it would increase its. It's a winner for everyone!  ”

Racing is made for this type of wagering. As Josh noted, the races take approximately two minutes – more if the sport embraces longer distance racing – and that allows for betting to take place with some flow. Harness racing is also blessed with tightly grouped fields, which result in close finishes, where just about every entry could take action while the race is going off.

It seems to have a following. At harness tracks in Australia, in-play wagering makes up about one-quarter of the total handle that’s bet before the event. That’s significant.

How would this model work here? Would it work? I think, if done correctly, it could. Let’s look at it through a crystal ball.

The first race is the 2 mile trot, with 14 entrants. Instead of a win pool odds board, there is an exchange where buyers and sellers can choose the horses they like, or do not like. The market makers assure liquidity, and one would hope, partnerships and interest have aroused the betting customer enough to create the volume needed for the exchange to work. There are people still betting win tickets at the windows, but they can choose a market price (where they are filled immediately and get a ticket with a locked in price) or a limit order, by choosing their odds.

When the race goes off, the market gets started. Randy Waples, on the pre-race favorite from the 9 post, gets shoved out four wide and settles in dead last. Phil Hudon on the four, the second choice, gets the lead easily. At home or at simulcast centres the feed shows the odds tick down on Phil to 8-5, while Randy’s horse rises to 12-1, as bettors make their bets. They’re not the only ones, though. Sylvain Filion on the six has second over cover, and several other horses are in contention. Those horses tick down a notch, too.

Past the mile and a half marker, Randy who has toiled in obscurity near the back of the bus suddenly makes a sweeping move. It seems the pace has taken its toll on the leaders and his charge is fresh as a daisy. His price plunges in an instant, as smartphones and computers send in their bets. In the middle of the Georgian homestretch, Randy is home. His price falls to 1.01. Race over.

Is that an unlikely scenario? No. In fact, almost the exact thing happened in an Australian race with a horse named Splitzer last July. 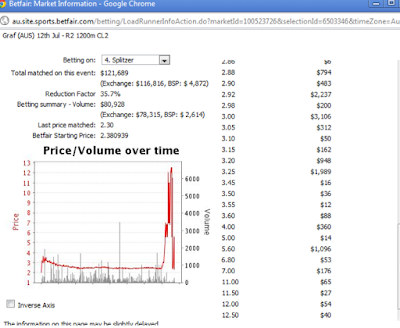 Splitzer, who was a short priced favorite before the race began, broke slow and settled last in the field of fourteen. After spiking to 12-1 with thousands of dollars traded, he circled the field and won the race.

This is not fantasy. It’s very real.

“The people you really need to hear from are the great unwashed, the people who are not even looking at you........”

This form of betting, if you speak to a traditionalist, might be met with a blank stare. Current bettors want to make their superfecta bet and cheer that home. They don’t mind what racing has been serving them. However, that’s not really relevant and it won’t affect them in anything but a positive way. For example, win betting could still be done in the system with an added bonus: A price is locked-in , so instead of watching their odds change after the bell - a long held complaint in small pool harness racing – they get what they pay for.

The biggest boost though, is with the “people who are not even looking at you”.


People often complain racing is too complex to learn. They have a point. What 25 year old wants to study a program with numbers they don’t understand, to bet horses he or she does not know by standing up at a wicket, and to likely lose money doing it. It’s like harness racing is selling root canals.

I know nothing about NASCAR racing, but I was watching a race a couple of weeks ago and could see that the #4 car of Kevin Harvick was moving really well. While some of his opponents were plagued with a shaking chassis on the turns, his car was smooth as glass and he “looked live”. If I could’ve bet him in the race at that point I would’ve, even though I am a complete newbie NASCAR fan.

It’s not hard to envision the same thing with in-running harness betting:

You don’t have to be Pittsburgh Phil to notice what horse is traveling well at the half mile pole. It’s not difficult to notice that the horse on the lead has a good chance to hold on if the pace is slow; or the horse sweeping three high with a fast half has a good chance.

You don’t need form cycles, or trainer change notes, or statistics to play a race in-running. For people who are intimidated by racing, this might be a perfect tonic.

The market expands further, when we include the statistics guys and computer modelers. Those betting characters love numbers, and the thrill of figuring out the win percentages and related betting returns at each points in the mile is something they crave.

“One day, in fact, the competition will pass you and the satisfied customers will quietly leave..... “

If I told you that in a few years hence harness racing could deliver a system that gives added excitement with bells and whistles like a slot machine, reduces down time between races, makes each race a unique betting event, could attract a technologically savvy younger audience by allowing them to use their smartphones and tablets to bet, that would make headlines around North American racing that scream “hey, look what they’re doing in harness racing in little track in Ontario, it looks like a blast!”, and that attacks the scourge of small pools and odds that change after the bell, you’d think we were looking at a game changer.

I’d have to agree with you, In-running betting, done right, can be exactly that.