The Association of Gaming Equipment Manufacturers on Wednesday announced the results of a report by Las Vegas-based Applied Analysis about the nation's slot machine industry. The results will be no surprise to horseplayers:

"“While statistical correlations on a state-by-state basis vary due to any number of factors, the broader, aggregate trends would suggest a rising hold percentage has not translated into incremental gaming revenue for operators during the post-recession era,” the report concludes. “In fact, they very well may be contributing to its decline.”

Often, the horse racing industry discusses takeout reductions and makes conclusions in rudimentary fashion, i.e. if a super high five bet's rake drops from 15% to 10% and does not attract more dollars, people do not care about takeout. This, as the above study shows, is exactly not the way to look at it. It needs to be looked through a gambling lens. It's about hundreds and hundreds of exactas paying $40 instead of $50, which over time, degrades bankrolls, where bettors feel they have little chance to beat a game.

Interestingly enough, racinos in Florida bucked the trend. They lowered takeout by a whopping 32% since 2006 and increased revenue from slot machines. 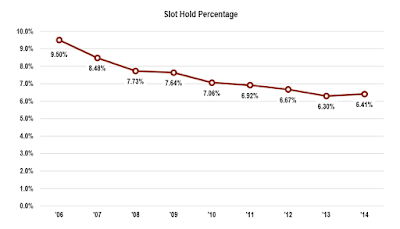 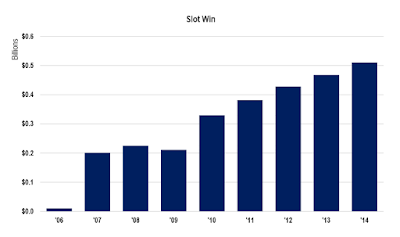 Slot machine users, like scratch lottery users have been defined as "non-price sensitive". They might not make decisions based on a hidden hold, but they know when they're broke too often. When they do, they stop playing. Horseplayers - in fact, all gamblers - act the exact same way.
Posted by HANA at 11:10 AM