Shanklin Series Will Be Worth Following

Bill Shanklin has a post up today regarding parimutuel handle changes in the US. In future posts he will be examining the reasons for the decline, which according to his figures, shows handle losses of over 42% in real dollars since 2003's peak. It looks like this series is worth following.

We caught a glimpse on twitter if a graph recently that showed California's handle decline. We had heard rumors handle there was off, with short fields, competition for betting dollars, a takeout bump and so forth, since the early 2000's and this confirms that.

It will be interesting to see if racing can do something to stem the tide, like some other jurisdictions seem to have. 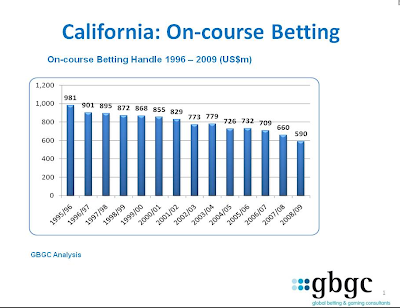