The Meadowlands Is Catering To You, The Customer 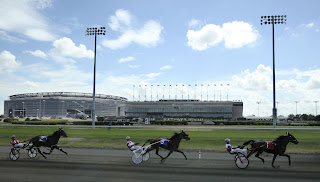 The Meadowlands in East Rutherford New Jersey was purchased (some might say "saved") recently by Jeff Gural. During the past several months there have been many changes at the Jersey track, and most, if not all, were trying to benefit you, the horseplayer.

Some of these items include:
Today they announced they are taking this one step further.

There is nothing more head-scratching than a stale date horse. Was he sick, was he injured, did he have vet work, will he be tight? Seeing a horse off 27 days in harness racing is like a thoroughbred off 100 days with no workouts but sometimes they win, because they are fine, and trained hard for the race.

In a place like Hong Kong the issue the horse had, or may not have had, is published on a website. In the NFL, injury reports are the norm, because bettors need that information. In North American racing, you are left guessing.

At the Meadowlands you have some help. From today's press release:


The Meadowlands Racetrack program will now include enhanced information on horses showing no race lines for three weeks or more.
In the comment section for each race, those horses with 21 days or more away from racing will have some explanation of the reason for the inactivity and remarks on their level of preparedness for the upcoming race, provided by the trainer. Much like an NFL “Team Report” that indicates why a player missed practice or a game, this report will provide bettors with a little more information that they would not normally find in the past performances.
For simulcast bettors, the layoff report will be posted as a TV Graphic on our nightly broadcast. Additionally, the layoff report will be posted on The Meadowlands Twitter Account and Facebook page.
We hope this information will be helpful and we encourage all trainers to make this information available and as accurate as possible for our customers handicapping.
These comments will be recorded by the Meadowlands Race Office and offered without edit or opinion by Meadowlands officials.

You can probably rest assure the comments will be honest, because if a trainer runs off the screen after telling the public his horse will likely be short, he might have a meeting with Gural and it won't be overly pleasant.

These things by themselves won't change the world. However, in our survey of horseplayers for both HANA Harness and HANA, you said you wanted lower takeout, better carded races, no training by cell phones, better information and tracks catering to trainers who don't get positives. The Meadowlands has delivered a lot of that.

For many years customers have wondered if there was anyone on their side in the sport. The Meadowlands appear to be telling us they have our backs, and bettors are responding. So far this meet the handle is up about 30%, and $3.5 million dollar nights are back in Jersey. This without slots, or government help; just done with something long forgotten in horse racing at some tracks, listening to their customers.

Excellent post. Gural is, as you suggest, showing the guts and creativity that is so sorely lacking from his Thoroughbred racing counterparts.