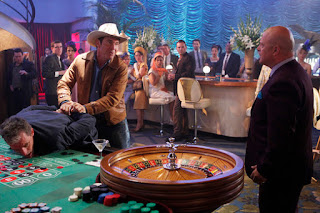 Tuesday's this fall a new 1950's set crime drama debuted on CBS called "Vegas". For those over the age of 35, no it does not star any character with the name "Dan Tanna".

I decided to give it a watch the other day, and one scene was pretty apt when we discuss horse racing.

Michael Chiklis, who plays a casino owner, has to hire a new manager so he calls "head office" and they send someone into town. She is Wharton schooled, a daughter of the 'big boss', and deals pretty well with numbers. What she lacks in experience is made up for in book smarts. She gets the count room humming and all seems well.

However, while scanning the casino floor she notices that dealers are not hitting on a soft 17 at blackjack (e.g an ace 6 draw). She confronts Michael Chiklis with this and says:

Chiklis's character notes some disapproval but then gets a call. A few hours later he receives another call, this time from his new employees father asking him to implement her soft 17 rule. He grudgingly does.

A few scenes later he and his new employee are walking the floor. The soft 17 rule change is bringing in more money that week and he complements her on it. She says thank you.

Then he schools the Wharton grad on some common sense gambling economics.

"Yes, we will do better this week, and the squares on vacation won't notice, but over time fewer and fewer people will play blackjack here. They won't be nickel and dimed. They know when they have an edge that's been taken away. They'll play across the street and they won't come back and it will cost me millions. "

Racing needs a Michael Chiklis. Someone to put the hammer down when the suits want to raise horse racing takeout, in the guise of "making more money". Destroying a players' edge might look good on a spreadsheet, or to a bean counter, but in the real life gambling world it's a long-term path to the poorhouse.