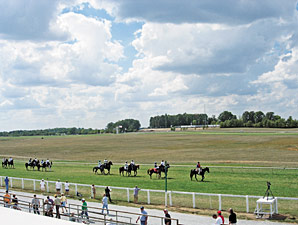 Kentucky Downs will offer an expanded wagering menu featuring some of the lowest takeout rates in North America when it opens its 2012 live race meet on Saturday, September 8.

This year, Kentucky Downs has lowered takeout rates on all of the wagers offered during its 2011 meet by anywhere from one to three percent.  The takeout rate on the popular Exacta wager has been lowered by 3.75 percent – from 22 percent in 2011 to 18.25 percent in 2012.

Kentucky Downs also will provide horseplayers with more wagering options in 2012 with the additions of two Pick Four wagers, a Pick Five wager and a Super Hi-5 wager on each of its six racing days.

“We are sending out a clear message that Kentucky Downs greatly values and
respects horseplayers,” said Corey Johnsen, Kentucky Downs president.  “With
a wide array of wagers plus an across-the-board reduction of takeout rates,
we believe Kentucky Downs will have one of the most inviting wagering menus
in North America this year.”

“I’ve always considered the exacta to be a staple for horseplayers,” said
Johnsen.  “By making our exacta takeout the lowest in North America, we are
showing horseplayers that we are as serious about improving our wagering
product as we are every component of our live racing program.”

Kentucky Downs previously announced that its total purse structure will
increase by 242 percent in 2012, with average daily purses of $409,000.
Kentucky Downs also will introduce five new stakes races in 2012, bringing
the total stakes schedule to seven.  The stakes schedule is headlined by the
Grade III Kentucky Turf Cup, which will be run on Saturday, September 15 for
a purse of $200,000.

“Our goal is to provide full, competitive fields in races that horseplayers
will find interesting and exciting,” Johnsen said. “That, combined with some
of the lowest takeout rates anywhere, should make the upcoming season of
live racing a winner.”

Kentucky Downs is planning to make more information available to bettors
than ever before. The track has launched a redesigned, information-rich
website that will include racing news, analysis and opinion. Rick Lee, one
of the most respected handicappers in the region, will make the Kentucky
Downs morning line and offer daily selections. Track announcer John Lies and
Gary West of ESPN.com will offer analysis through daily seminars and the
track’s simulcast signal.

Located in Franklin, Kentucky, Kentucky Downs has been transformed into a
year-round entertainment center that offers live racing, simulcasting seven
days a week, Instant Racing, charitable gaming and other events.
Posted by HANA at 12:57 PM

Great news!Looks like one track is doing more than talking.

This is the track that paid the owners but left the players with nothing after posting the wrong number. NO THANKS.